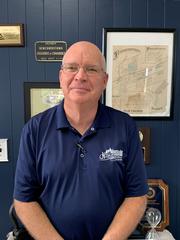 Pat was raised in a family of 7 kids.   He was the oldest boy and number 2 in birth order.  His family moved 7 times whenever his dad could get a better job.  He moved to Ohio at the end of his sophomore years in high school.  Graduated from Mogodore High School in 1975.  He then graduated from the University of Akron in 1980 with a B.S. in Elementary Education.

Mayor Cadle is passionate about the community and loves helping people.